How are people setting up Usage Plans

Background: We’ve pretty quickly hit the “Usage plans per API key” default limit of 10. I’m trying to understand if we’ve hit the limit because we’re doing something atypical, or if there’s a better way to control how different Consumers (Public/Partner/Private) can have usage of our API’s managed (rate limiting, quotas etc), and understand if there’s assumptions serverless makes about ApiKeys and usage plans.

We currently setup a usage plan in each service referencing the PUBLIC_API_KEY_ID of an existing ApiKey:

If we need to expose API’s to different consuming partners we need to have multiple usage plans in each instance of a service, as mentioned in this issue

Across mutliple services this broadly ends up looking like this: 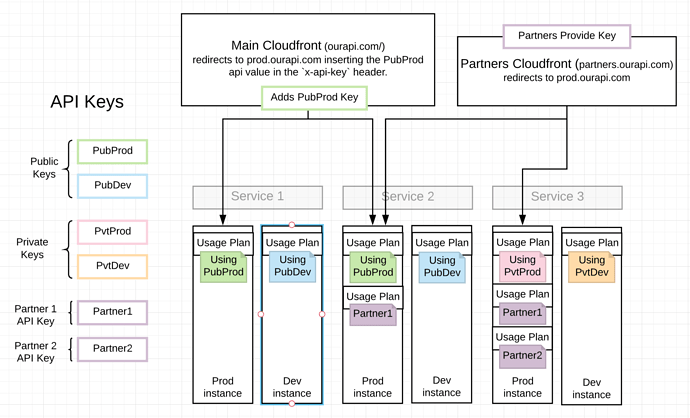 This isn’t terrible but there’s a couple of frustrating things with it:

I have a feeling I know that the answer is that Cloudformation doesn’t support it, but What I think would be ideal is if we could make each instance of a service associate itself with a shared UsagePlan. In a similar way to what we’re currently doing with the API Keys, but as far as I can tell there’s no equivalent of AWS::ApiGateway::UsagePlanKey (something like a AWS::ApiGateway::UsagePlanStage association).

It’d look something like this Imgur: The magic of the Internet (I can’t embed more than one image here)

This would be nice because

Great write up and description of your issue. So you’re right about the shared usage plans. There is a limit of 10 Usage Plans per API Key, but I’m not aware of a limit to the number of stages that can be associated with a Usage Plan.

I have a use case for a client that is similar in that they share an API key across multiple services. But we use a single Usage Plan associated with multiple services/stages and then just associate the API Key with that Usage Plan. I’m not sure of the CloudFormation support, but we use the API directly to create and associate keys instead of relying on the Serverless Framework to do it.