How to Deploy a Lambda Function Using a Local Python Package

TLDR;
Unable to link dependency `my_local_python_package` becasue a file by the same name exists in this service

Turns out that the error message is spot-on. During deployment, a temporary symlink is created, and the symlink that it was trying to create would have overwritten the name of my folder containing my python package code. I placed my python package within the folder src so there would be no name conflict.

I’m attempting to deploy a Lambda function, written in Python, that uses a custom, local Python package called kcam. Below is my layout.

*My Lambda handler function is inside foo.py

In order to install my_package, I have been typing pip install -e .
*Note the period at the end.

So now, in order to deploy my Lambda, I have made my requirements.txt like so:

*Note the period at the top.

I’m able to install everything with sls requirements install

However I’m running into an error with sls deploy 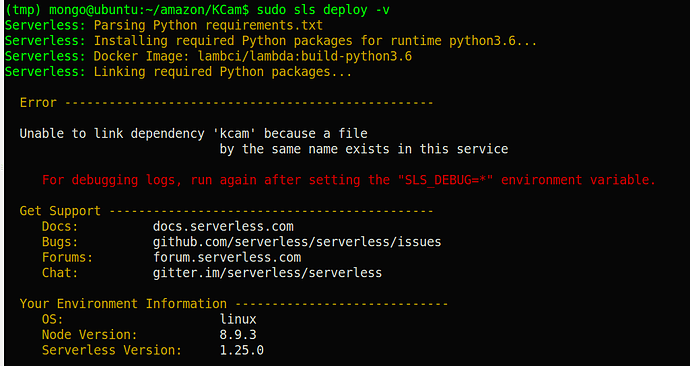 As this problem be solved because I am facing a similar issue.
I have an external python package that I can install in my virtual env which is then appearing in my requirements.txt file but I would needd somehow to have this package transfered so that it can be reinstalled on the server side

Here is my error message: